Dwayne “The Rock” Johnson has won a lot of titles — from his time in the ring to his box-office hits — and now he can add People‘s Sexiest Man Alive title to his list of accomplishments.

The wrestler-turned-actor was crowned this year’s winner Tuesday morning, Johnson, 44, tells the magazine that the honour means he has “pretty much reached the pinnacle.”

Johnson may be the highest-paid box-office star in the world, but that’s not the only reason why he’s the Sexiest Man Alive.

Still up at 4am trainin' hard & takin' care of my babies.. sexily;).
Thank U @people & all the fans. Grateful for the luv! #SexiestManAlive pic.twitter.com/e8O2orOBJR

READ MORE:Dwayne ‘The Rock’ Johnson is now a shoe designer

1. He has one of the best bodies in the business

Johnson’s wrestler physique is the product of his hard work and dedication to his extensive diet and exercise plan, which is required to maintain his 260 pounds of muscle. He keeps his physique in perfect physical condition by eating over 5,000 calories a day — approximately 10 pounds of food — spread over a total of seven meals. Johnson’s secret to his success is he lifts heavy, hard and often. 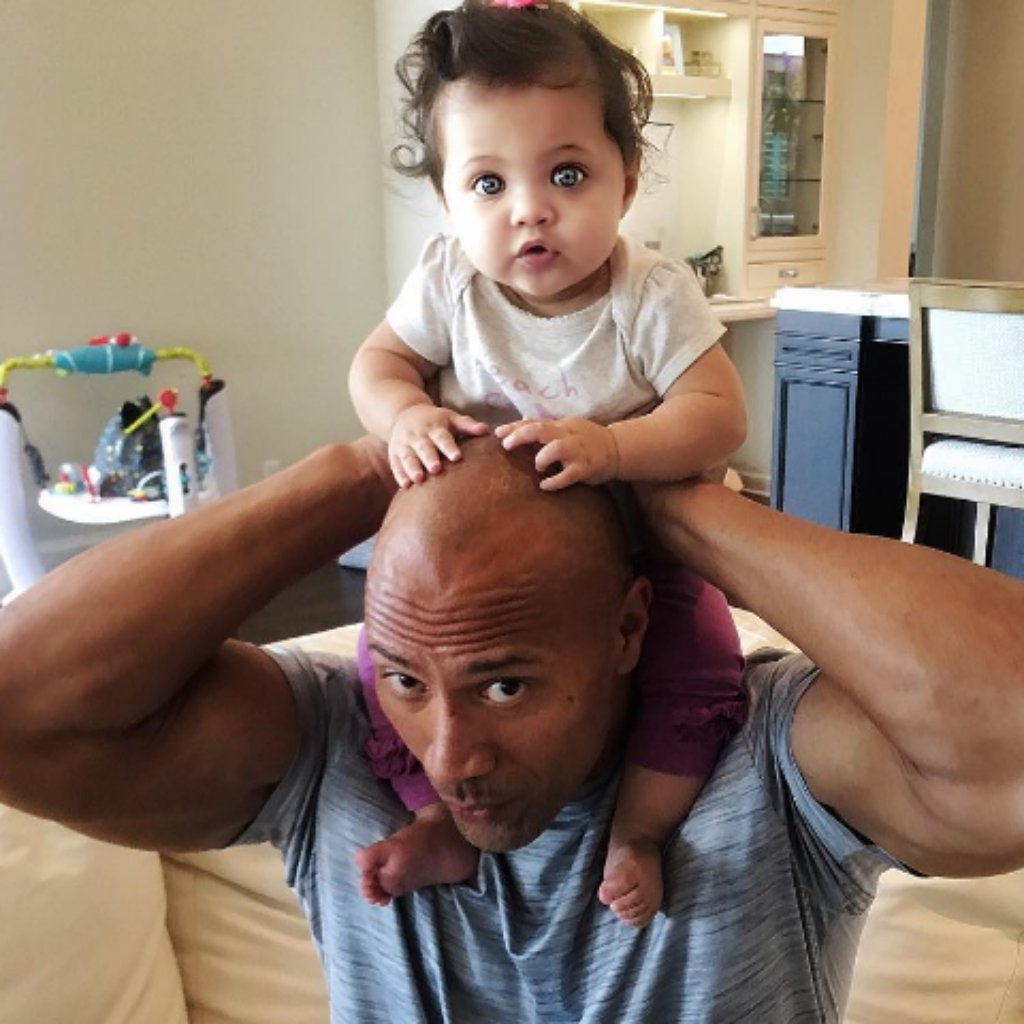 The Rock has proven that despite his massive size, his heart is even bigger. The former professional wrestler and his longtime girlfriend Lauren Hashian welcomed their daughter and first child, Jasmine, in December 2015. He is also a father to 15-year-old Simone, his daughter with ex-wife Dany Garcia.

“We just have this awesome family that is truly non-traditional but so rooted in love. And that’s such a cool thing,” he says. “I’m very proud of it.”

Johnson dressed up as Pikachu (Jasmine’s favourite character) for Halloween and went on to perform the “JuJu” in the costume.

“By the time I dropped my 197th JuJu, the heat of this costume was kickin’ my ass.😂 But, hey.. that’s what daddy’s do,” Johnson captioned the video.

Pikachu is baby Jasmine's FAVORITE character. So, for Halloween me and @laurenhashianofficial decided the real life Pikachu was gonna come to the house for a visit. What Pikachu didn't know was that Jazzy would start crying when he stopped dancing and demanded he continue to shake his tail with a loud "EH!". So, Pikachu danced over.. and over.. and over.. and over… and over.. again. By the time I dropped my 197th JuJu, the heat of this costume was kickin' my ass.😂 But, hey.. that's what daddy's do. #HappyHalloween #DaddyBlessedWithThatKnuckAndBuckStamina #NoLimitsWhenItComesToMakinEmHappy

The Rock hails from the Great White North. Well, kinda. His father is Nova Scotia-born wrestler Rocky Johnson, which makes him, at the very least, half-Canadian. And lest we forget Johnson’s brief stint in the CFL.

4. He voices a Disney character in an animated film

Johnson’s trading his usual action fare for some family fun, showing us that he’s not all muscle. He lends his voice to Disney’s animated film Moana, set for release on Nov. 23, 2016. The new Disney movie stars Johnson as a mighty demigod named Maui, who accompanies the titular heroine on a journey to save her family. The film is notable for introducing the first Polynesian Disney princess, which Johnson calls “a once-in-a-lifetime thing.”

Johnson will be part of the crew of lifeguards that will be hitting the beach as the new Baywatch hits theatres in May 2017. He stars as Mitch Buchanan (a character made famous by David Hasselhoff), a dedicated lifeguard who finds himself facing off against cocky newcomer Matt Brody (Zac Efron). But when the pair teams up, they discover a criminal conspiracy that threatens the beach. The Rock has been sharing plenty of pictures from the set on social media, much to everybody’s enjoyment. 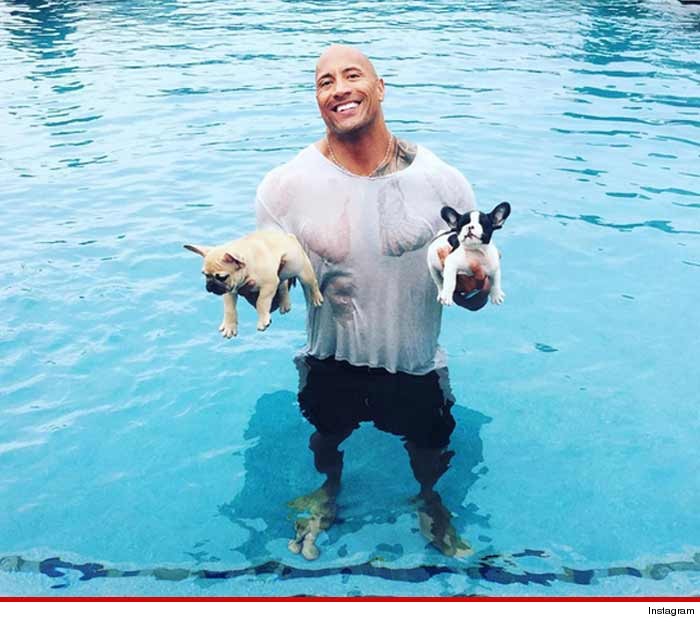 As Johnson outlines in the caption for his Instagram picture below, there’s a “fun Labour Day weekend story” to go with the photo. French bulldogs named Brutus and Hobbs joined Johnson’s family over the holiday, but the minute they got to their new home they jumped into the family pool.

“HOBBS immediately starts doggy paddling while BRUTUS (like a brick) sink head first to the bottom of the pool. I take off into a full sprint, fully clothed, dive in the pool, swim to the bottom, rescue my brick, I mean BRUTUS and bring him back to the edge of the pool. He was a little delirious.. took a moment, threw up all the water he swallowed and looked up to me as if to say, ‘Thank God you didn’t have to give me mouth-to-mouth!’ and then ran off to play with his brother.”

Here's a fun Labor Day weekend story… We just decided to add two new members to our Johnson family. Baby French Bulldogs. In my right hand is BRUTUS and in my left hand is HOBBS. Bring them home and immediately take them outside so they can start learning how to "handle their business and potty like big boys". I set them both down and they both take off in a full sprint and fall right into the deep end of our pool. HOBBS immediately starts doggy paddling while BRUTUS (like a brick) sink heads first to the bottom of the pool. I take off into a full sprint, fully clothed, dive in the pool, swim to the bottom, rescue my brick, I mean BRUTUS and bring him back to the edge of the pool. He was a little delirious.. took a moment, threw up all the water he swallowed and looked up at me as if to say, "Thank God you didn't have to give me mouth to mouth!" and then ran off to play with his brother. A few lessons I've learned today.. A) Not all puppies have the instinct to doggie paddle. B) Some puppies (like BRUTUS) will be so in shock by experiencing water they will sink extremely fast so react quick. C) While spiriting to save your puppies life, before you dive in, try and throw your cel phone to safety. Don't keep it in your pocket… like I did. #BRUTUSLives #HOBBSCanSwim #MyCelPhonesDead #AndNoMouthToMouthNeeded #HappyLaborDay

Johnson said that Americans may be seeing “what The Rock is cooking” in the White House in 2020. It’s somewhat believable considering he’s ranked at number 4 on a Ranker list gauging potential readiness for office. The former pro wrestler first acknowledged the idea of presidency in March, when he shared an article on Twitter that showed images of why people want him to put his name on the ticket.

Cool piece on why I should run for President. Maybe one day. Surely the White House has a spot for my pick up truck..https://t.co/JpkZ4w1eh3

The 44-year-old told Michael Strahan in an interview on Good Morning America that the idea of his future in politics is “very real.”

“If it is a very real, overwhelming, positive, strong, ‘We want you to run for president,’ and if I felt that I can step up to the plate and become a tremendous leader for our country and make a real difference and make change, I would do it,” the HBO Ballers star said.

“I’ll tell you right now, that sounded so presidential,” Strahan said liking the idea. “I’m like.. ‘put the ballot out there!’”

With all of Johnson’s playful nudges on the subject, there may be a possibility of seeing this “jabroni” in the White House one day.

WATCH: @TheRock running for President one day? It's not a far-fetched idea for the do-it-all star! https://t.co/ekAMvfysgi

Johnson is set to discuss his new status with Ellen DeGeneres on her talk show Tuesday.

With files from Chris Jancelewicz, The Associated Press and ET Canada