Now a full week since the Winnipeg Jets were knocked out of the bubble, the organization is starting the long process of looking back at went wrong after a second straight early exit.

“Nobody is happy when you lose, right,” head coach Paul Maurice said. “Everybody is in a god awful mood for the longest time.”

While in the end they’re just excuses for failure, but the Jets didn’t catch a whole lot of breaks last season. From Dustin Byfuglien’s decision to stay home, to Bryan Little’s devastating head injury, to Mark Letestu’s heart condition – it was just one weird thing after another.

“I’m really, really proud of the way these guys continued to fight,” Maurice said. “There were so many events that were unexpected that could have been catastrophic in a lot of ways, but players didn’t let that happen.”

“I thought we faced the challenges as best as we could,” general manager Kevin Cheveldayoff said. “Obviously the results aren’t what you’d like, but that’s what you’re dealt with in pro sports sometimes.”

The Jets depleted blueline was a major source of much of their problems after the losses of Big Buff, Jacob Trouba, Ben Chiarot, and Tyler Myers. And only three of their current defencemen that played in the qualifying round series are under contract for next season, including Josh Morrissey, Neal Pionk, and Tucker Poolman.

“Most of the analytics will tell you that it’s the defensive components of our game that you’d like to see get better,” said Maurice. 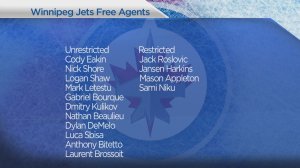 Maurice just signed a multi-year contract extension back in February. The Jets have made the playoffs just three times in his six and a half seasons behind the bench, only getting past the first round once. But Maurice believes he’s still the right man for the job.

“I’ve been to the conference final three times, the Stanley Cup final,” he said. “This year I’m going to rate as top three years that I’ve had in this league, and I’ll include my staff on that.

“We did a fantastic job surviving what we went through.”